The legal basis of the European Arrest Warrant (EAW) relies on:

The EAW was established in 2002 by a Decision of the Council. It consists in a judicial decision held by a Member State, asking to another Member State to surrender an individual accused of a crime in the former country. The purpose of this instrument is to simplify the procedure of arrest and extradition among the EU countries, without the need of single agreements between MS.

The European Arrest Warrant was the result of terrorist attacks after the 11/09/2001. At the beginning this instrument was considered only in order to pursue the crimes that can be considered linked to the terrorism, but then was extend on 32 different crimes.

The list on these 32 subjects is about crimes commonly known as such by all the EU states. The approval of the list of crimes was the result of long negotiation between the 15 MS at the time.

Following a map that shows the number arrests done thanks to this tool. 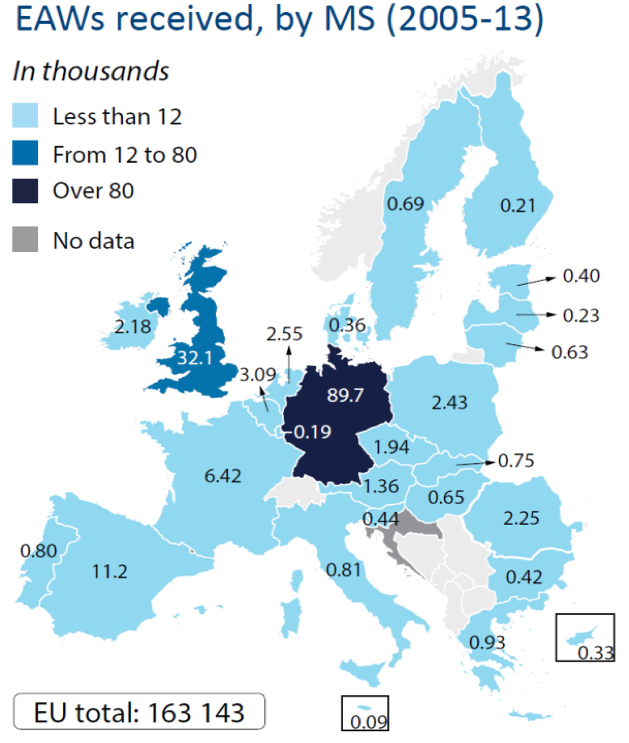 The current challenges that EU has to face, such as Brexit or the Catalan situation according the extradition of the leader of the protest started in October 2017, put under pressure also the system of EAW.

In the case of Brexit, the hot point is how to manage the issue of the extraditions once that the United Kingdom will be out of the Union, also because UK arrests on EAWs are one of the highest level compared to other MS. According to the result of the negotiations and the following deal, something can change regarding the EAW. [4] 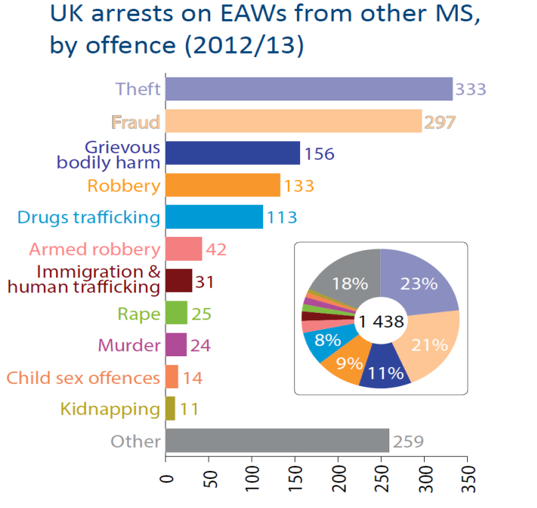 In the case of Catalan independents leader, Puidgemont, the EAW was request by the Spanish authority, after his left in Belgium in order to escape the process against him. For the Spanish authority the imputed crimes are rebellion, sedition and embezzlement. The Belgian authority in this specific case has rejected the extradition for two of three pending charges against Puidgemont, saying they are not mentioned in the least of crimes above mentioned. Thus the extradition will be awarded only for the embezzlement, the least serious charge. The Spanish authority so asks for a list reform, saying that should be updated.[5]

In this quarrel the EU Commission doesn’t accord the reform, because it is possible that further negotiations on the topic can create discontent and move backwards in the purposes already achieved.

In addition, according to Fair Trial organization[6], the issues that should be solved by the EU Commission are not only in terms of enlarging the sphere of action of the EAW, but on its application. Considering for example the check of proportionality of the judgement and respect of human rights in the prisons.[7]