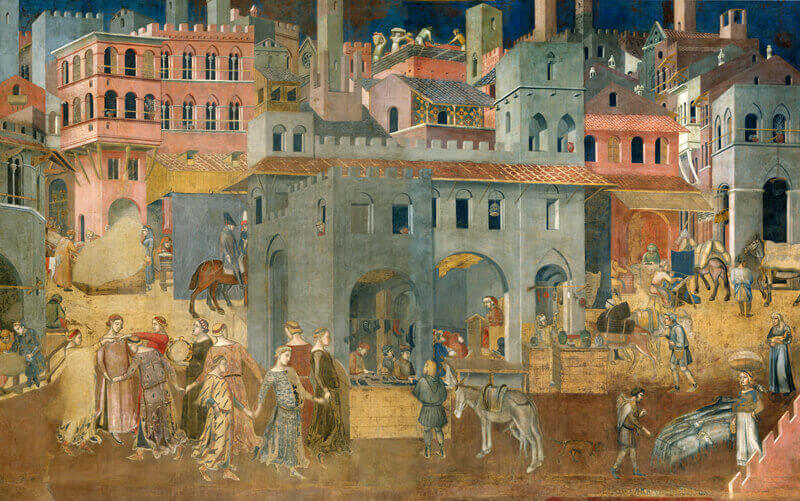 The Middle Ages is perhaps the darkest and less known historical period. Its essence has been corrupted by different prejudices and distortions, all of them sons of the Renaissance and above all Enlightenment. Moreover,  inexact traditions, poems and recently the rich production of fantasy and “historical” films have led to a state of chaos in the idea of the three Middle Ages’ main features: feudalism, aristocracy and chivalry.

The aim of this article is to shed light on these three concepts unveiling their composite nature and how they were reciprocally linked from a historical evolution perspective.

Do ut des, lands for swords

In order to clarify such a complex topic, it is necessary to start from Feudalism. Commonly, Feudalism is a sort of cauldron in which everyone puts vassalage, castles, noble dominion and violence. This confused vision likely was born at the end of Feudalism history, during the French Revolution. In fact, intellectuals like Montesquieu deemed aristocracy’s privileges and the diverse set of laws as the heritage of a far past: the Dark Age. However, what they saw was only the ultimate part of  a process which did not characterise  the Middle Age entirely. Therefore the typical image of a social pyramid with the king on top, followed by vassals and valvassors must  be reconsidered.
Feudalism is based on the personal relationship of loyalty between a powerful individual, often a nobleman, and another person who swears him faithfulness. In exchange for some services, such as public offices or military duties, the latter received protection, a new social role and lands whence take money to pay weapons, armors and horse to become a knight and fight for his lord. What the vassal received was called first beneficium and then feudum. Under the King Charles the Great, all free people should took part of the kingdom army but, because of the huge cost of weapon set, only people  who had big enough lands was able to achieve the status of milites.  This social organisation was tested in the Carolingian Empire and was the result of the combination of German bonds and Roman patronage relationships. Hence through this power redistribution, Charles the Great obtained the support of noblemen which allowed him to conquer and expand his empire.

During the Carolingian Age, aristocracy was not a fixed class of important families with great powers, but a fluid class in which ascensions and descents were frequent. Besides, despite what the major part of people think,  in this moment family heritage was divided among all children. For this reason historians tends to distinguish the aristocracy of Early Middle Ages from that of Late Middle Ages, calling the first one nobility. The nobilis was someone who could claim an ascendance from a renowned ancestor. The power came from the possession of lands, public office and dominion on other free people who can fight for him. Therefore, nobleman’s target was boosting his prestige through military successes, the widening of his armed clientele, the obtaining of even more important public and ecclesiastic offices and above all reaching a certain closeness to the king using targeted weddings.

The building of European nobility

After the death of Charlemagne, the crown was divided between his descendants and the consequent fights for the power made the former empire territory an easy prey of the Normans, Hungarians and Saracens’ invasions. Families which were closer to the Carolingian kings tried to conquer the throne. Those who managed to solidify his control on a vast land making the public office hereditary could obtained the thrown, such as the count Hugh Capet who became King of the Oriental France (current France) or Henry I king of the Western France (Germany). On one hand new royal families decided to distinguish their new status from that of the high noble families through the creation of royal symbols and rituals. On the other hand similar acts were done by high aristocracy towards lower noble class, obtaining the title of prince (princeps). Since the closeness to royal family was not a good aim anymore for its dangerousness, middle and low nobility preferred to focus their strength on the establishment of a secure control of their lands. Since they were the only ones who could defend and construct solid castles and fortifications to defend people, they succeeded in stipulating new vassallage pacts with local inhabitants. From that moment, noble families started using land’s name which they controlled as surname.

Feudalism as a net. The redistribution of power

The most spread story-telling states that during IX-XII centuries Europe was divided in little territory powers, in which the political centre was the castle that dominated on the near villages and cities. Actually, things are more complicated than this. First of all because the beneficium could be not only a land or a city, but also objects. For example a person who lived in a village had different bonds towards different lords, depending on whether he cultivates a certain land or took refuge  inside a certain castle or use a certain mill. In addition, even lords can be vassals of more than one lord. Therefore, a better image to describe the social shape of those centuries is a net full of knots and tears.

In the same period, in order to avoid the dispersion of family heritage, nobles started preferring to leave heritage to the first-born. Other sons had to seek fortune away becoming knights under other lords. In this moment being a knight became a sort of job full of privileges  that could be chose from anyone who was able to afford military set. Even though the major part of knights was made up of noble boys, there were many of them who came from lower class and through their war enterprises obtained public offices, lands and noble positions. In this phase historians see the birth of European aristocracy with whom future kings will have to divide their powers until the imposition of Absolutism in the XVII-XVIII centuries.

Despite what chivalrous poems told, first knights were main characters of violence phenomena if they cannot find a lord who paid them. For this reason, a reformer branch of Catholic Church instituted the movement of “God’s peace”. It was realised through periodical meetings in which bishops made knights swear to avoid unjustified violence and to not use weapons in certain days or period of the year. Besides, the Church created an ethical model based on the defense of weak people, women and children.

From the XIII century European kings of the rising national monarchies began a campaign of reconquest of their regalia submitting feudal lords. They not only made use of the sword to achieve their aim, but also the Roman law. Through this innovative tip, they managed to pigeonhole that articulated net of feudal relationships creating a hierarchic social class that next centuries have drawn as pyramid.  The result was a progressive revival of the concept of central public law and power which was the soul of Roman Empire.  The feudal law was born.