I was born and raised in Gaza Strip, Palestine. I had lived in that enclave for twenty years and once I left it, I decided to deliver the sufferings of its people and spread the truth to the external world in order to earn its sympathy and support. That emanates from a belief that our conflict with the Israeli occupation cannot be resolved by weapons, but also through raising awareness. At the moment, I am doing a bachelor degree in Sociology at Marmara University in Istanbul. I aspire to construct an intellectual debate that corrects the misunderstandings about Palestinians, and offer a vivid picture of their daily life, which will remain one of my main responsibilities.

Three years ago, on July, 10. I lived one of the blackest days ever in my life, the day I lost my balance once and forever. I cannot forget that appalling night when I was in the apartment with my Palestinian mates sitting in the same room in order to follow the news that come quickly from the heart of continuous offensive over our families and people in the Gaza Strip where Israeli military was testing its fatal weapons to kill inhumanly and indiscriminately. We were five in the room, all of us are Gazan Palestinians and we all had families to worry and be concerned about.

Unlike ever before, we were so frightened and terrified that any of our family members could be at any moment harmed or killed by the bombardments and artillery shells that were not differentiating between kids or women, civilians or fighters, all they cared about is to raise the toll of deaths as possible as they could.

Every one of us was tasked to follow a different news page for the purpose of being able to catch all the news, be it Facebook or any other news website. I still remember that critical moments untill this very moment, in which fear was unprecedented and unimaginable. Our families are under the threat of death, death that none of us is ready to accept its endless bitterness especially when you are apart from your family for years. The flowing news were dreadful and atrocious, friend 1; Urgent, the Israeli warplanes have targeted a building consists of six floors, a dozen were killed and many others are still missing under the rubble. Friend 2; a target of a motorcycle in AlJalaa street in the mid Gaza city. Friend 3; there is some news about a possible ground invasion for the Israeli troops from the eastern borders with Al-Shujaiya area. Friend 4: I cannot reach my family on phone, I am so worried that they are harmed.

Shockingly, while I was looking into the news, a friend cried saying; Mohammed there is a target of Nijim family in Al-Nuserirat camp for refugees where my family resides. Abruptly, I got into a unique state of anxiety and fear that entirely overwhelmed me. I started trembling and quivering unconsciously. I also felt that I cannot touch the keyboard buttons or even take a step ahead on my feet. I randomly started to make make calls to make sure that none of my family is harmed. After trying many times, nobody answered. Shortly after, I remembered a friend who is usually available on Facebook, whom I immediately called and asked her to call my family and check on them. She did and reassured me. I was blessed they are fine, for that time at least.

A couple of hours later, I came across news of a new target of Al-Nawasra family’s house in AlMaghazi Camp for refugees. I instantly had a strange feeling that something awful has just happened. My sister Aisha was married to Salah who belongs to Al-Nawasra family and who both live at the same building that has just been bombed. On the same day “In Istanbul”, it was Ramadan and I received an Iftar invitation from my friend and I needed not to let him down. In fact, I ought to think positively and let go of bad things regardless of the terrible situation and all flagrant incidents occurring in my homeland and critical moments that we have been through in the recent days. I can do nothing, but think positively and be optimistic for a couple of hours in order just to have my Iftar normally and then get back to newsroom at the apartment.

I got out of the house, but I could not get to the Iftar place. On my way, I received a phone call from Palestine, I knew that it is what I think. I was hesitant to answer that call, I had no power to press that button because I was never ready to hear it, I really am not. It is my mother calling, she was weeping, she cried; Aisha is gone Muhammed!. Wait! Let me put myself together, I should hear it again, I want to make myself believe that what is being said is not true. Are you serious Mom? We just talked yesterday when she was at our house with her husband in a visit. I cannot believe that we won’t be able to speak anymore, please she is not gone. She told me on the phone that she misses me, and I expressed my gratitude and love to her too. Why did you let her go back to her house, you know it is not safe, she should have stayed at our house for yesterday’s night. We cannot change destiny. She was beautiful, son. More beautiful than usual, as if she was saying goodbye to us and paying her farewell visit.

I lowered the phone and burst into tears in public, like a little boy who has just been injected mercilessly. Two of my friends were accompanying me to the Iftar, they were trying to console and calm me down, but there was nothing they could do except watching me crying and defeated. Crying on such occasions is the silliest manner to express your grief. I wanted to shout loudly to let the whole planet know that what is hapenning down there is damn unfair and insufferable. But hey, wait! The silent world did not speak a word in the past two aggressions over Gaza Strip, I think I’ve lost hope in them. I doubt they would make it this time and stop the arrogance and savagery against innocent Palestinians.

In the massacare of Al-Nawasra family, five innocent souls were taken out in a cold blood, just like other hundreds who have been killed in the same manner. Aisha had died with her pregnant baby whom she desperately wanted to see after having difficulties in getting pregnant. Salah, who was sleeping peacefully in his room has disappeared forever with his two nephews, who were just two and four years old.

Despite the fact that Aisha’s body turned into unidentified pieces due to the heavy bombardment, I wanted to join the funeral to, at least, smell her body and whisper goodbye in her ears. I couldn’t, I was deprived to see my dead sister for the last time in life due to the continuous and unjustified closure of Rafah borders “The only gate to the external world for Gazans”.

In the “Operation Protective Edge” that Israeli military conducted in Gaza, approximately 2000 people were murdered, most of whom were civilian children and women who had nothing to do with Israel and its “Moral Army”, all their mistake is that they lived in Gaza unwillingly. The world must know that Aisha was killed for no reason. It must know that the people who are being killed in each war are not numbers. They are people like me and you, had dreams, aspirations, incomplete emails in the draft folder, they were ordinary people like all of us and they had the full right to live peacefully and with dignity. 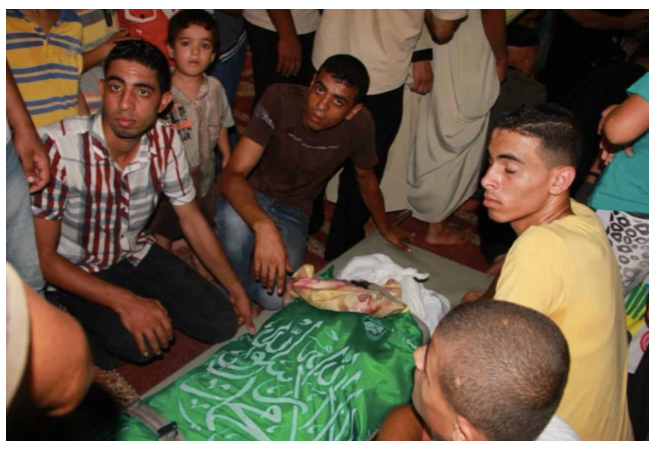 This is an original image taken in the hours immediately after the bombing described in this testimony.